„DIE HÖHLE DER LÖWEN“-panel in WERK1 – No arrangements, no script and no second take! 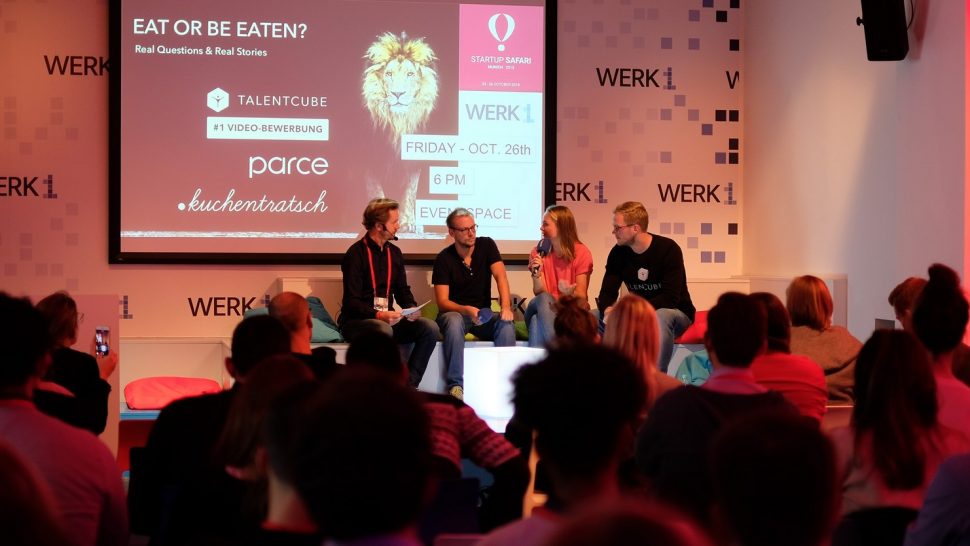 Show or chance? High input, low output? Or a “kickstart” to get started with your own startup? With about 3 million viewers, the founder show “Die Höhle der Löwen” is also very popular with German TV audiences in the fifth season. But does this also apply to the start-ups, whose ideas are competing for the favour of the five investors? Will the “deal” actually be followed by a contract? Or is everything just fake and if anything good for PR? Three startups with relevant experience in the TV format told the story in a “Cave of the Lions Panels” in WERK1.

While in the adjoining room they hacked and genetically engineered at more than 20 other locations throughout the city, Startup Safari participants were able to pick up tips and insights from those who had already successfully faced the lions at this special panel. Also present: Katharina Mayer from the Munich social startup „kuchentratsch“, which sells cakes baked by pensioners to private customers, companies and restaurants and just comes fresh from the cave. Sebastian Niewöhner, who wants to make videos to the new application standard with „talentcube“ and Malte Janduda from the Smarthome-Plugin-Startup „Parce“, a WERK1 Resident. Both were in the Lions’ Cave in 2017. The questions that probably burned on the lips of everyone in the audience were asked by Florian Mann, WORK1 CEO, who moderated the evening.

HOW DO YOU GET INTO IN DIE HÖHLE DER LÖWEN?

For Talentcube the recommendation by another startup was the key to the cave. Parce and kuchentratsch applied in a classic way. The questions of the investors (especially about numbers and scalability) were prepared particularly thoroughly by analysing previous seasons. In addition, shopify was used to prepare the web shop for the expected rush. PR and employees also need to be well prepared.

HOW DID THE PRODUCTION GO?

All three startups were thrown into the cold water and had to prepare and organize themselves for the two-hour recording. There was no help or tips from VOX, contact to the investors was actually only possible during the shooting. No agreements, no script. And no second take! They all had no experience with TV and therefore also some “jitters” before the unfamiliar situation, respectively before the approach in post production. The founders’ concerns: that completely incoherent takes be combined at will, just as it suits the dramaturgy. Tip from Katharina Mayer: Always smile beautifully, keep your face under control, never look sad or disappointed. By the way: a whole 11 months of gap had talentcube between shooting and broadcasting – an eternity for the 2-year-old startup at that time. It’s a good thing that the investor contract was signed directly after the start of production…

WHAT WERE YOUR EXPECTATIONS? AND WHAT WENT COMPLETELY DIFFERENTLY THAN EXPECTED?

As expected, the focus was on entertainment, the founders summed up. Although the deals at the pitch are negotiated realistically and brutally, as a startup you convince first and foremost by media performance or by a stirring story – and “yes”, the producers of Sony also casteted for optical suitability in advance.

While parce and talentcube had already focused on one or two investors before, kuchentratsch went into the negotiations quite openly. But all three came to a good agreement with “their” suitable investor.

WHAT HAPPENED AFTER THE SHOW?

The expectations of the start-ups were also met in terms of response, albeit to varying degrees. However, they had all tended to expect more immediate rush. The contract negotiations went very well for kuchentratsch and talentcube, both of which had won Carsten Maschmeyer as an investor. Carsten Maschmeyer continues to support them beyond business with valuable tips and a lively investment community. Unfortunately, Parce was unable to reach an agreement with Frank Thelen. However, they were able to make significant progress with their existing investor. Rare damage where no benefit.

WOULD YOU GUYS DO IT AGAIN?

Both Katharina and her male founding colleagues praised the steep learning curve that resulted from participating in the show. All the excitement and all the new experiences offered, besides the financial gain, such an added value that above all cake gossip and talentcube would always be there again. The main reason for Parce not to do this is because of their product. The emotional factor in her Smarthome gadget was simply not enough to promote quotas. The other two also emphasize this: The Lions’ Cave is an ingenious springboard for mass-produced, easily understandable “consumer goods” – in the form of a balanced mixture of show and business. What some television disenchanted “Millenial” wouldn’t necessarily suspect. Katharinas, Sebastian’s and Malte’s conclusion on the participation in the show was correspondingly positive at the panel.

At this point we at WERK1 would like to thank the three of them once again for the exciting and entertaining insight and thus for the support during the Startup Safari in general. 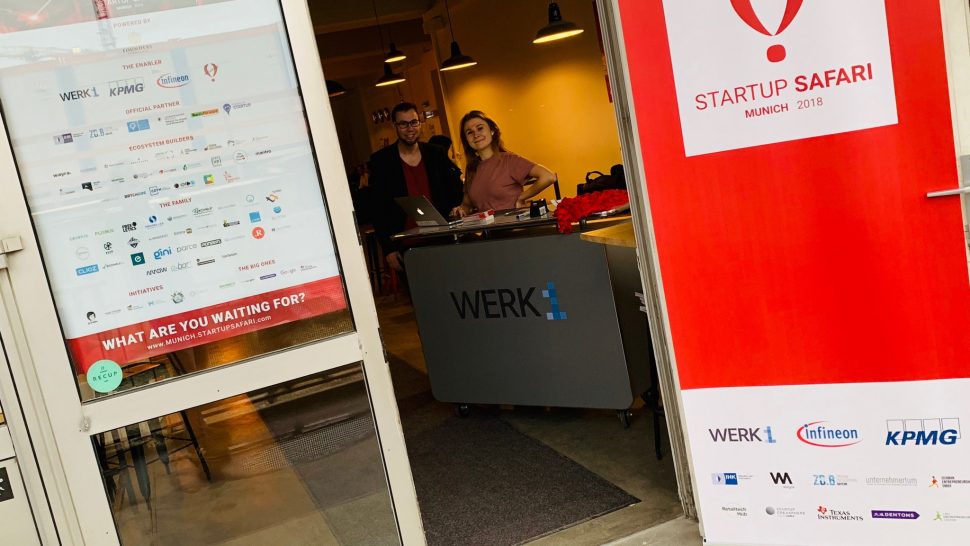 Three days full of events around topics that move the startup scene. The venue is GANZ Munich, around 20 locations spread across the city. It will start in 12 weeks. “Actually a completely crazy idea”, was how initiator Daniel Kilger summed up the last evening of the Startup Safari. “Florian Mann and Oliver Halbig from WERK1 were the first to hear about my plan. And they said directly: “Cool, let’s get going!” So WERK1 did not only become an important partner of the first Startup Safari in Munich, but also the main sponsor and host of about 20 sessions and the pre-opening party, as Daniel Kilger, the creative director of the event, put it.

An expedition through the whole ecosystem of the startup scene should be it. From 23. to 26.10. participants could put together their individual program with only one ticket from a timetable of 75 sessions at 25 startup friendly locations in the city according to their personal interests. Well over 80 partners from the startup scene as well as from official bodies, initiatives and media were involved. Among them were many big players, famous and aspiring startups like  Flixbus, Celonis oder Freeletics, big investors and accelerators, up to global corporations like Google. They all offered so-called “sessions” on various topics and thus opened themselves to interested participants for the exchange of knowledge and networking. The sessions ranged from workshops, lectures and discussions to informal “Connecten” with drinks and co. and direct matchmaking for almost 250 “Job Seekers”.

THE SESSIONS: THEMATIC DEPTH & “HANDS ON”

Daniel Kilger – founder of the Digital Health Sartups Smokeless himself – and his supporters felt it was important that the individual events were of high quality. As small groups as possible should ensure that the participants could work interactively with each other and with the experts.

For example at the workshop “Live Hacking” by the WERK1 Resident  Crashtest Security, which took place on Friday evening. The aim for the participants was to discover a website in a kind of “Escape the Room Challenge” and to understand how a hacker thinks. “The website I programmed in advance contains vulnerabilities,” explains workshop leader and co-founder of Crashtest Security, Janosch Maier. “I want the participants to find them. Afterwards we eliminate the vulnerabilities together. So we’re really working “Hands On” with security here.”

THE PARTNERS ALSO BENEFITED FROM THE PARTICIPATION

The range of participants was generally very mixed, just like in the Startup Safari – concerning the background but also the know-how. From students to software developers everything was represented. Regardless of the topic – “The Art of Pitching”, “Storytelling in the context of a presentation”, “The way from employee to founder” and many more – it was always about sharing knowledge, but also about profiting from each other in the aspects of recruiting and networking. But the motive for the WERK1 Resident Crashtest Security was above all the community idea, as co-founder Janosch Maier says: “We simply wanted to give something back to the Startup Network with our participation as workshop organizer and thus as partner of Startup Safari. Personally, I think the idea behind it is great that you really have the opportunity to pick out exactly what interests you as a participant in a totally flexible way. And we startups, on the other hand, have the chance to present ourselves to a broad audience during the three days”.

Daniel Kilger also sees Startup Safari more as an opportunity for founders and the scene itself to give something back to the community. “For me, the whole thing is a kind of hobby project. Because I’m convinced that the Startup family here in Munich can do great things.” He seems to be right about that, if you look at the scale of the event, which was originally planned as a “pilot” within a very short time. “We didn’t expect it to be that big. Originally, we just wanted to see which partners were in the boat and whether this was an interesting topic for people at all,” jokes Kilger. “And then, to be honest, it completely escalated. In eight days we sold more than 1500 tickets and in only 12 weeks we started 75 sessions at 25 locations. All important accelerators and partners are there. We would like to take this opportunity to express our sincere thanks for this. Of course also WERK1 as main sponsor, without whom all this would not have been possible. We are mega happy!

AND WHAT DO THE PARTICIPANTS SAY?

The feedback from the participants, who met with the WERK1 residents on Friday evening for the final get-together – the Silicon Drinkabout – in the packed WERK1 Café under the motto “No talks, no bullshit, just networking and free beer”, was also consistently positive. Student Kim Nike Wiedenhold: “Unfortunately, I was only able to participate on the last day, but I attended several events at the same time, because I’m very busy with the topic of reasons. Above all, I thought it was great that you can get in touch so easily with experts from many fields, but also meet like-minded people with whom you can exchange ideas”. Other participants particularly emphasized the good organization during the three days, the multi-faceted nature of the topics and contents as well as the quality of the sessions. The latter was particularly close to the hearts of the initiators, stressed Daniel Kilger shortly before the collective departure for the Closing Party at “Enter the Dragon” on Lehnbachplatz in Munich. “During the planning phase, we placed special emphasis on “niche” topics and small groups so that the participants could not only listen but also work together interactively. Where do you get the chance to pitch in front of professionals who improve you immediately? Or when do you have the chance to go in to Google and have a chat with some of the employees?”

Good question… If you don’t know the answer to this question and unfortunately missed the Startup Safari 2018 yourself, you can rest assured that there will be a repeat. Daniel Kilger and his supporters already have “big plans” for that, too. But we won’t tell yet what these plans will look like. The main initiator is only revealing this much: “We will expand the whole thing, go even deeper. One thing is certain: As an important supporter of Startup Safari, WORK1 will also be significantly involved in the new edition. So: Stay tuned!