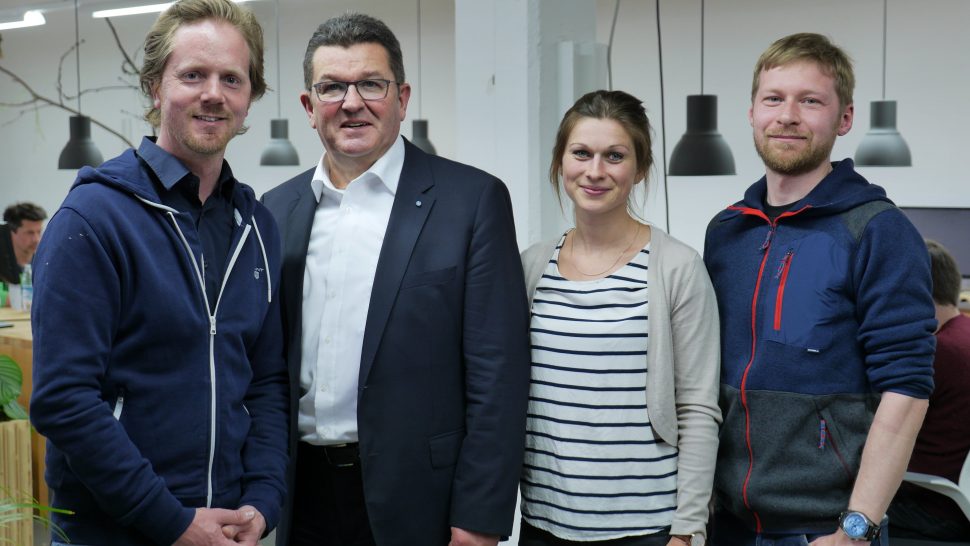 At WERK1 we have frequent visits from representatives from politics and the Ministry of Economics. But that the newly elected Bavarian Minister of State for Economic Affairs chose WERK1 as the location for one of his first official appointments made us especially happy. And it again underlines the importance of entrepreneurs, startups and their support of the ministry in recent years and in the future. Together with a team from Bayerischer Rundfunk, the minister was remarkably laid-back and in a good mood on 27 March for over an hour at our house and on close contact with young startups. Finally, he certainly took the opportunity to be inspired by the creative and ambitious atmosphere in the building.

“We recognize the importance of the entrepreneurs for the economic future in Bavaria by the fact that we have meanwhile created 12 digital business incubators at 22 locations throughout Bavaria. WERK1 is of course one of our showcase projects, of which we are very proud.”

During the tour our startups Smartlane, Crashtest Secruity and myChipsBox had the opportunity to briefly present their work in WERK1 and to explain once again the advantages of working in a digital business incubator – as well as their significance for the digital development of the Bavarian economy. With the digitalization of the middle class, data security and conscious nutrition and/or ecological packing could be made clear to the Minister also at three large subject areas, on which challenges founders in Bavaria concern themselves at present concretely. Afterwards the way led past a hackathon, which was organized by chance as part of our Digital Health Accelerator. Thus the minister once experienced live how a new surprise, another team or a whiteboard with creative ideas hides itself in WERK1 almost around every corner.

Afterwards, our coworking space became an interview area: Mr. Pschierer answered a few questions to Bayerischer Rundfunk about his plans for the development of the Bavarian economy in the next few years and which focal points he would also like to set in the area of development of the automotive industry in the coming years. Afterwards our WERK1 managing director Dr. Florian Mann spoke to describe from his point of view what is necessary to further improve the conditions for entrepreneurs in Bavaria. Of course, he also took the opportunity to give the Minister some wishes from WERK1’s point of view: “In this context, we would wish that we continue with this determination, do not stop where we are now and can develop a greater impact”.

We are already looking forward to our next visit and a continued successful cooperation with the Bavarian State Ministry under the new leadership of Mr. Pschierer.