Code+Design – The Programming Pros of Tomorrow working on WERK1 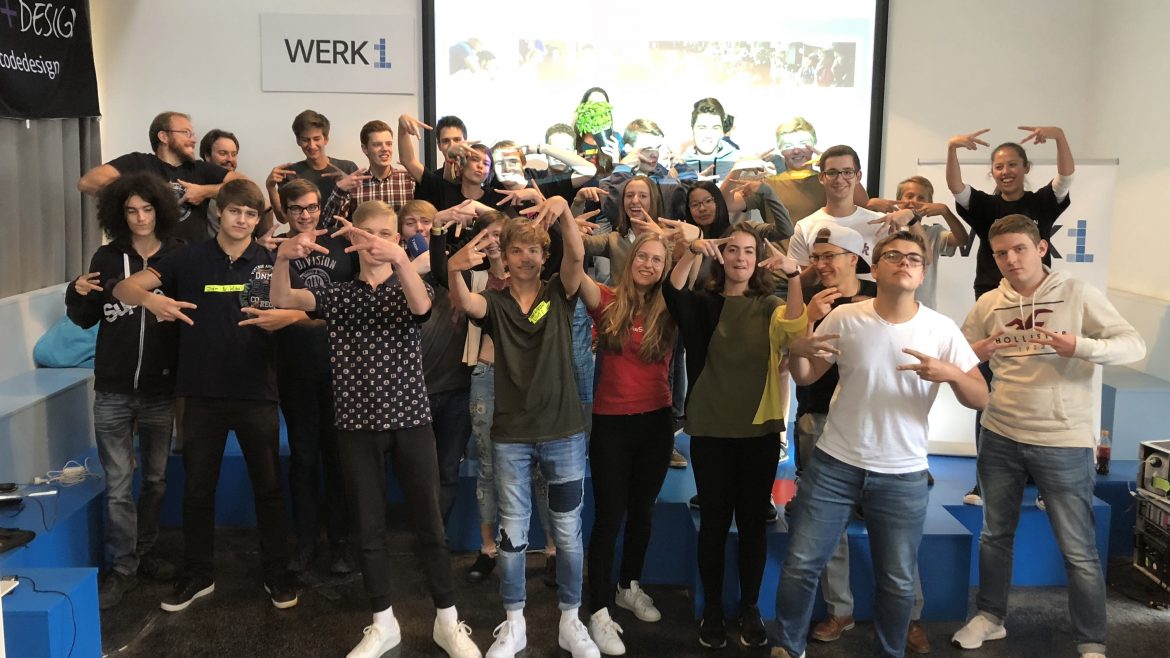 Working on your own exciting hardware and software projects for four days, exchanging ideas in a community of interest of the same age and being shown new technologies by professional coaches – this is the program of Code+Design, a workshop that has been touring all over Germany for around two years and is aimed at young people. For the second time the WERK1 was host and offered thereby from 30.8. to 2.9. approximately 30 beginning Programmier-Pros an inspiring surrounding field around itself to try out.

The nationwide programming camps for young professionals are organized by the gemeinnützigen Code+Design Initiative e.V.. “Our goal is it to inspire more young humans for digital technologies and to inform about the different career profiles , explain Anna Bckner, one of the Coaches, which supported the participants in the WORK1. Three can be young people between the ages of 15 and 20. Which knowledge level they have in puncto Coding and Co. play thereby no role, say the Coach – both advanced ones, and bloody beginners are welcome with the Worshops in cities such as Hamburg, Frankfurth, Munich and CO. “The point is that young people who have a basic interest in the subject can try it out. The basics in programming language, for example, those who don’t know it yet, learn it quite casually.”

TAKE WITH YOU THE EXPERIENCE OF EVERYDAY WORKING LIFE

As usual for Code+Design, the camp at WORK1 took place in the “Hackathon format”. This means: At the beginning, the participants who already have a project idea present it. Then teams come together to work on the different ideas in project groups – purely according to interest. Until the final presentation on the last day, the groups develop concepts, some even first prototypes. In support of the coaches, who can all draw on professional experience in the business and report to the participants on their own experiences in the job. Like Anna Brückner: “The nerd who locks himself in the cellar with his games and eats pizza is an absolute prejudice. When you work in coding and IT development, you have to be creative. There’s a lot of teamwork and you have to have social skills. The young people experience all this in our workshops.

THE PROJECTS – FROM GAMES TO APPS FOR YOUR OWN EVERYDAY LIFE

But what do the projects look like that the participants in such a camp set themselves as a goal?

“Of course, the topic of gaming often occurs, so developing your own games,” explains coach Anna Brückner. “Or it’s about everyday problems that young people encounter. For example, a girl brought her friend’s cane with her. And the idea that a kind of sensor and GPS could be integrated into it to make it easier for her to find her way around. One of the participants, for example, developed a program for his school’s secretary’s office – this is in use as far as I know today – with which the school can draw the students’ course choices fairly by algorithm.” Still others, including the participants in Munich, are developing apps that make the waiting time for a bus, doctor’s appointment, etc. meaningful – with short lessons and exercises from areas such as foreign languages, politics, biology, etc., and also from the school. Another Munich participant has been annoyed for a long time by the fact that there is always a fight at parties because not everyone likes the music. His idea: a program that, for example, matches all spotify accounts of the party guests and then only plays the titles that are represented on as many of them as possible.

Working on the things that keep you busy in everyday life. And to have small success experiences at it again and again – that is the reason, why the young people are so enthusiastically with the thing, says Betreuerin Anna Brückner. “That’s why we have so many repeat offenders. Those who take part are really super motivated. You can see that from the fact that some of the kids arrive much earlier in the morning than we even start. And stay even longer in the evenings to continue working on their cause in the groups.” On the other hand, competitive thinking doesn’t play a role, says the coach. “On the contrary, everyone gives each other input and exchanges solution ideas. No project is maintained higher than the other, no matter whether it’s a game or an app with a social background.”

WHAT DO THE PARTICIPANTS SAY?

I guess that’s what they call licking blood. Jonathan can only sign it. The 17-year-old high school student and his school colleague took part in Code+Design for the second time. “Unfortunately, programming is a hobby that is not very widespread. That’s why it’s great to get together with a lot of people our age and to think with them about how you can advance your ideas. You really learn a lot what you can use during your studies or training.”

THE PERCENTAGE OF GIRLS IS GROWING

As a non-profit initiative, the initiators of Code+Design are naturally dependent on any supporters. WERK1 therefore made the location freely available.

Five girls were among the almost 30 Munich participants. Often, however, the ratio of male to female participants is 50/50, with a minimum of 25 percent girls, reports Anna Brückner. More and more young women are finding their way into the profession. Certainly also a merit of the Code+Design Initiative e.V., which ensures with the four-day camps like ours at WERK1 that young people with such an area of interest find their way into professional life.