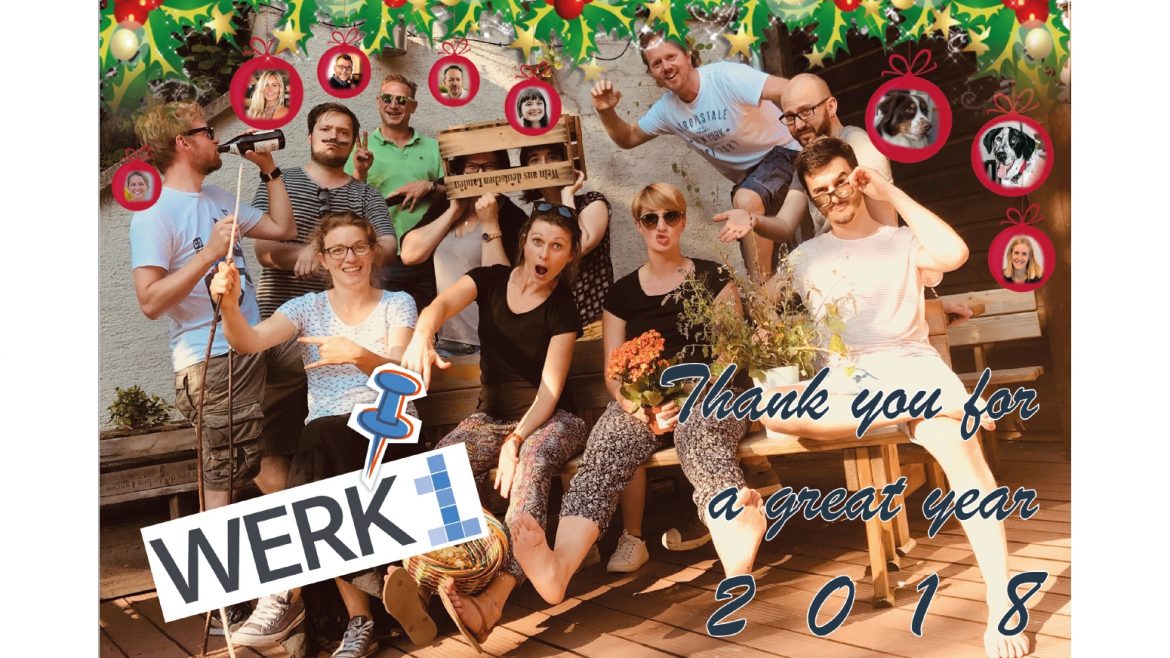 A great year is coming to an end for all of us at WERK1: 29 new startups moved in over the year and the number of coworkers more than doubled in just one year from 74 to 130. Thanks to the new Slack Channel and a freelancer platform, both sides profit more from each other than ever before. With a new coworking space and Office RnD as a tool, we have put the infrastructure on a completely new level and set the technical foundation for the “Perks & Benefits” program introduced in autumn. With the hiring of Tina, the WERK1 mentoring program has also been launched. In addition, we have organized over 200 events for the community in the house.

The WERK1 team also grew very strongly in 2018. Especially due to the development of the new InsurTech Hub here in the company, 22 people are now working here from the café to startup support.

In addition to start-up support and coworking, the accelerator programs are an essential part of the work at WORK1. After the successes in the InsurTech area, we discovered Digital Health as a new topic for us in 2018, based on the successful launch of the “Future X Healthcare Event”. Together with Roche, one of the leading companies in the healthcare industry, and Plug and Play, the world’s largest provider of accelerator programs, we launched the first Digital Health Accelerator for Munich.

The startups spent five months working on their projects out of WERK1 with the help of mentors. And we weren’t lazy when it came to InsurTech either: In 2018 we carried out the 4th batch of the successful W1 Forward InsurTech Accelerator together with the InsurTech Hub Munich and the participating insurers.

The special feature of this batch was that it was almost twice as large as its predecessors. 75 startups applied for the programme this year. Nine international teams, including one from Australia and two from India, were selected in the end.

The requirements for this batch were greater, from start to finish. The recruiting process alone was more complex and international than ever. In the meantime, word has spread about our concept from Munich. This is a great signal of what a worldwide attraction we have developed.

Around €50,000 were invested in each startup in the form of infrastructure, top-class mentoring and direct links to more than a dozen globally active insurance companies. This “all-round carefree package” turned ideas into scalable business models in no time at all.

WERK1 did not only become an important partner of the first Startup Safari in Munich, but also the main sponsor and host of about 20 sessions and the pre-opening party, as Daniel Kilger, the creative director of the event, put it.

An expedition through the whole ecosystem of the startup scene should be it. From 23. to 26.10. participants could put together their individual program with only one ticket from a timetable of 75 sessions at 25 startup friendly locations in the city according to their personal interests. Well over 80 partners from the startup scene as well as from official authorities, initiatives and media were involved. Among them were many big players, famous and aspiring startups like Flixbus, Celonis or Freeletics, big investors and accelerators, up to global corporations like Google.

This year was also a great year for our games team. Robin & Robin from Games/Bavaria here at WERK1, went to Zurich to the Ludicious together with a group of developers, celebrated the tenth GameCamp, had a great, fully booked gamescom in Cologne, curated and opened an exhibition in Nürnberg and were able to connect many applicants and vacancies with the Career Day at WERK1.

LOOKING FORWARD TO NEXT YEAR

Today, we would like to thank all our residents, partners and supporters! It is only because of you, your dreams and your commitment that our vision of the “most startup-friendly place in Munich” comes to life. And already now, we’re looking forward to our new adventures in the coming year. For now, let us celebrate what we have achieved.

The WERK1 team will take a break from Dec 24 through Jan 6 – we are looking forward to meeting all of you again next year.