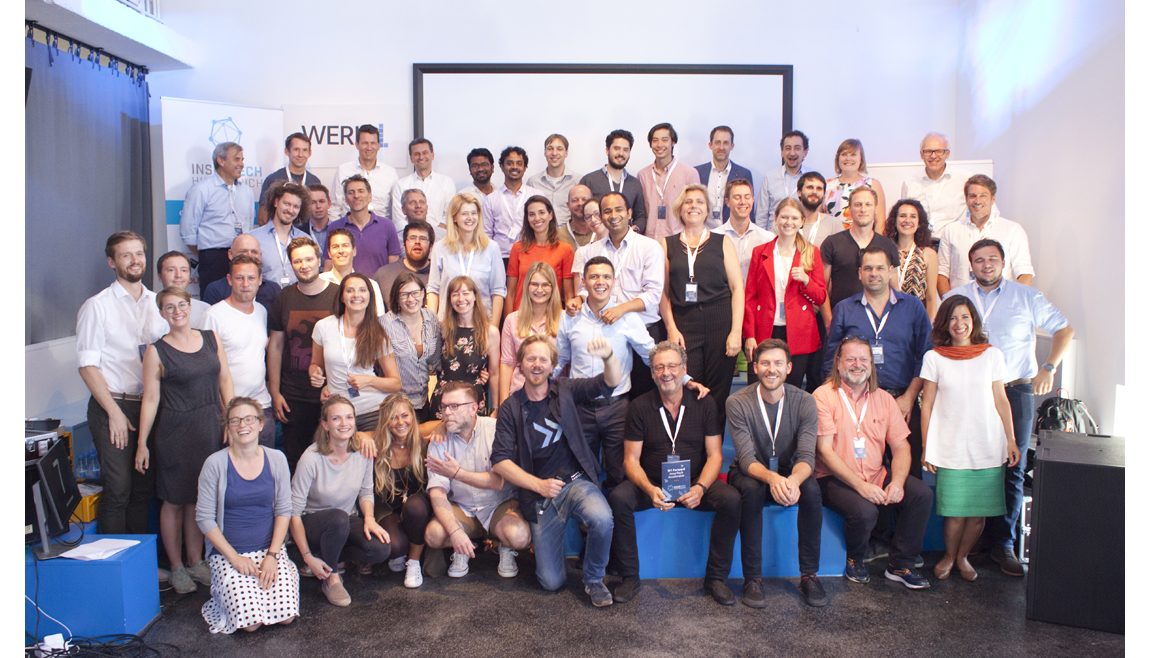 9 start-ups. Around 60 mentors. 13 insurance partners. 8 weeks. One could almost call it a small boot camp of the startup scene, which took place in the last weeks here in the rooms of WERK1. The result: Nine innovative solutions that could advance the future of the digital insurance industry. With the live presentations of the international teams the third batch of the W1>> InsurTech Accelerator ends successfully.

You’ve invested your heart and soul in the last eight weeks. But for most of the participants in the batch, that also meant less sleep and more coffee. But days like this are the reward for the hard and intensive working hours, because there was a lot of interest in their projects. The Eventspace: Full to bursting with almost 200 enthusiastic startup colleagues, investors, insurers and the curious.

The special feature of this batch is that it is almost twice as large as its predecessors. 75 startups have applied for the program this year. Nine international teams, including one from Australia and two from India, were selected in the end.

“The demands on this batch were greater, from start to finish. The recruiting process alone was more complex and international than ever before. In the meantime, word has spread about our concept from Munich. That’s a nice signal of what a worldwide attraction we’ve developed.”

Around €50,000 was invested in each start-up in the form of infrastructure, top-class mentoring and direct links to more than a dozen globally active insurance companies. This “all-round carefree package” turned ideas into scalable business models in no time at all.

After interviews on stage with the W1>>team members and a short speech by Tom Van den Brulle, Head of Global Innovation at Munich Re, the startups got serious. Each team had exactly five minutes to present its own project to the experts present. Here are a few examples of the presentations:

ANYONE CAN AND IS ALLOWED TO PITCH

Ayan Srivastava presented with a video the app Kruzr, which turns the smartphone into a driving assistant. The Kruzr language assistant could become a helpful co-pilot, e.g. by warning in case of increased speed or bad weather conditions, by suggesting breaks after longer driving times, or by simply managing incoming messages. The aim is to significantly reduce the number of car accidents.

The next step was the intelligent health platform Docyet, which can not only talk to the patients, but also has appropriate solutions for their problems with the help of artificial intelligence. Petra and Samuel von Freya discussed the topic of human fertility and possible insurance benefits, and Marguerite from MedPayRx explained how Blockchain technology can help patients buy medicines online in the future. At the end of the presentations everyone received a certificate. For Gilberto from Sydney it was a nice memory of an exciting and intense time.

„Since the first day I came for demo day, I felt like: this is the place. It was a really intense time, but I always wanted to get the most out of it! It was a huge opportunity to speak directly with a collection of insurance companies and it has really opened a lot of doors for us.“

The hard work was worth it. All nine start-ups have mastered their presentations on stage with confidence and professionalism. Program coordinator Daniel Nowack is very satisfied after the pitches, almost a bit sentimental.

“It was an incredibly dynamic cohort with whom it was a lot of fun to work together. Everyone could learn from everyone. On a day like today, seeing startups present themselves self-confidently who were previously very insecure is a huge gift!“

A SUCCESS FOR THE INSURERS

The W1>> InsurTech Accelerator connects the world of startups with the world of large insurance companies and not only the founders benefit. Johannes Wagner revealed us at the Demo-Day:

“For our insurers, it is a constant competition for premium innovations. We have to get to the top issues worldwide. W1>>InsurTech is a collection basin for this. Here we have access to premium innovations, not from Silicon Valley, but directly from Munich”.

Besides interviews, speeches and pitches there was of course enough time for celebrations and networking. At small booths each startup could introduce itself to interested visitors in the WERK1 Café and have a drink to discuss the ideas of the startups in more detail. Our evening ends at the booth of Freya and with the beautiful words of founder Petra:

„It was a unique program. We love it here in Munich. WERK1 has a super friendly atmosphere, we feel like home!“