Bits & Pretzels Startup Night: Networking and poker were the order of the day at WERK1 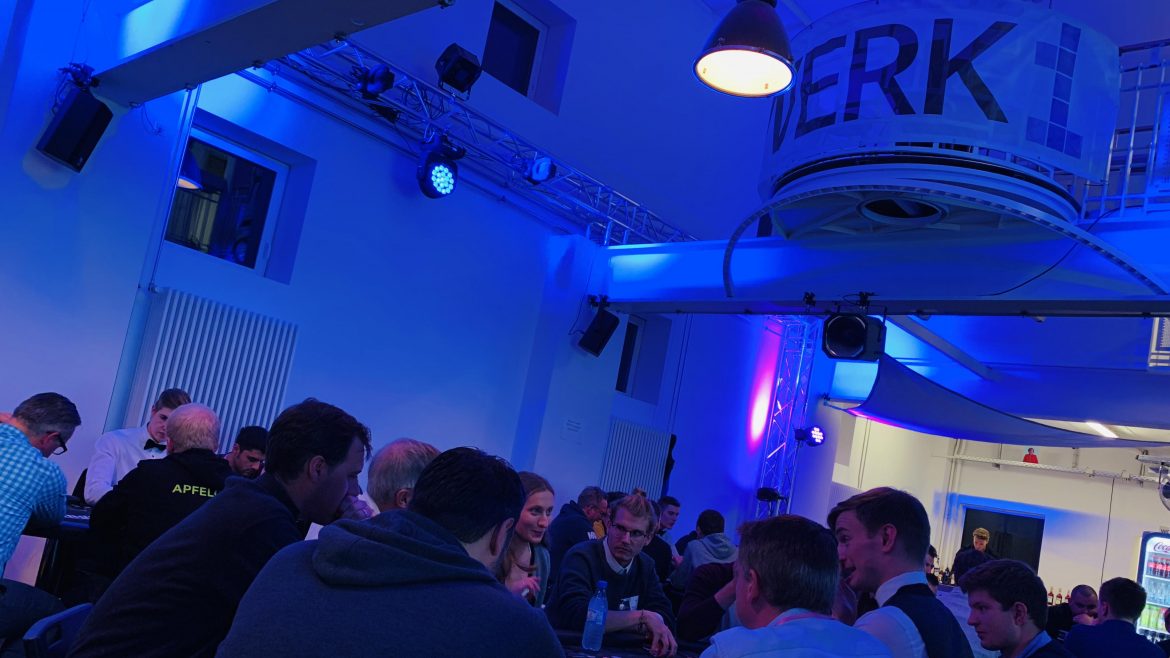 When the popular poker start command “shuffle up and deal” becomes “shuffle up and connect”, it’s time to start up poker. Already for the second time we were allowed to organize the legendary Gründerpokern in WERK1 as side event of the founder conference „Bits & Pretzels“ and so the Eventspace became the Casino for one evening.

Around 80 founders, entrepreneurs, investors and coworkers have come to exchange a few poker chips, but perhaps also a business card or two, in a relaxed atmosphere. The special at the founder pokern: Who does not know the rules of the game, gets briefly before the Event with the professional Pokerdealer a small introduction and can play afterwards with professionals and other a risers at a table. Who gambles away early its chips, gets over a 2. chance the possibility of taking again at a table of the main round place..

At 8 p.m. all participants started at the poker tables and with the game the first conversations began. “The nice thing is, it’s easy to get started. With Poker one has equal times a common topic. You have fun and contacts run along the way,” reveals Coworker Carl Steinbeißer, who obviously has fun at the event.

And that’s what founder poker is all about. Play against each other, but talk to each other. One advantage: At the poker table you not only get to know one person, but also the character at the same time. From emotional outbursts to poker faces, you could observe everything that evening.

“The special thing about Gründerpokern for me is the atmosphere. This is a very unagitated kind of networking. It’s quieter than other Meetup events. At the same time, however, you notice that the calm is rather superficial. Inside, it might look quite different. Some can play a role, while others reveal the true “Me”. The personal ambition that drives many successful founders comes into its own here, of course.”

But of course it’s also about the competition, where you can sometimes annoy the one or other investor sitting opposite you a little bit, says Daniel Kilger of Smokeless with a wink. He is also organising the first Startup Safari in Munich this year with WERK1 as his partner.

WERK1 will once again be an important host for startups and investors from the local startup scene during the Safari from 23 to 26 October. A total of 19 sessions will take place in our house these days. You can find out what these are here: https://www.werk1.com/event/startup-safari-munich/

The Startup Safari is like a big open day, with the special feature that it doesn’t take place at one but at many well-known places in Munich. Each participant can put together his or her own individual itinerary across Munich and visit Flixbus, Google or WERK1. The internationally already very successful event format takes place this year for the first time in Munich.

Anyone who lost at the table this evening at the Gründerpokern could take a seat at the cocktail bar and chat a bit with other participants and network here.

It was late night, until the final round was played out at the “Final Table” with the best ten and the lucky winners could accept their prizes. App developer Jonas Hackenberg was particularly pleased to win a ticket for the Bits & Pretzels 2019 with first place.

The event series Gründerpokern always takes place in changing locations in other cities. In Munich, the team comes to WERK1 again and again – this year we hosted Bits & Pretzels as well as 2 other events for almost 100 participants. “Because it’s simply so nice here that we love coming here again and again,” says Sascha Bevet, CEO Gründerpokern.

Who now has gotten desire on Poker and Networking: The next Gründerpokern takes place on 30 November – naturally with us in the WERK1