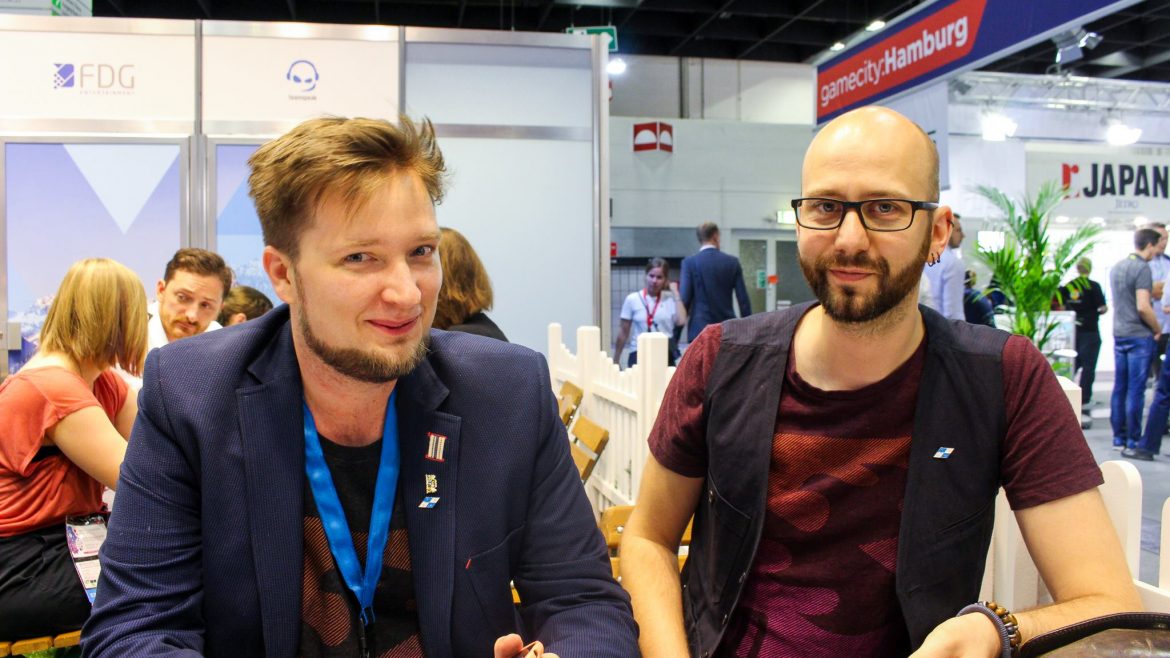 The games scene is booming – almost every second German today plays regularly on consoles, smartphones and the like – according to recent studies by the games industry. Gaming has long ceased to be a special interest hobby where the public turns up their noses. More and more, the creation of digital games is being perceived as an artistic and cultural asset, as well as an innovation and marketing tool. People like Robin Hartmann & Robin Kocaurek from Games/Bavaria ensure that the local games industry can also develop and network. On behalf of the State Ministry for Digital Affairs, the Games/ Bavaria team, which is connected to WERK1 and based here, promotes the visibility of the Bavarian games industry on the international stage. This includes more than 30 projects a year, some of them trips to international events where they network young creative people from the scene with developers, big players and co. The Gamesfestival Ludicious in Zurich recently took place – Robin and Robin made a road trip out of it. What it looked like and how such actions ultimately promote the games industry in Bavaria, they told us in the Recap interview.

WERK1: FOR ALL THOSE WHO DON’T KNOW – PLEASE SUMMARIZE WHAT YOU ARE DOING HERE AT WERK1. WHAT IS YOUR MISSION

Robin Hartmann: We are officially part of WERK1, but we are in charge of our own project, which is not hung up at the Ministry of Economic Affairs, like WERK1 itself, but at the Ministry of State for Digital Affairs. In a large corporation, you would say it’s like a “profit center”. We don’t just take care of startups here at the location, but also throughout Bavaria – but especially in the video game industry. It’s about startups, but also about students, veterans, publishers, developers, etc. We also support the Digital Ministry in implementing projects when questions arise about the games industry. And one of our tasks is to support international visibility, a bit of location marketing and companies in the industry. And that’s why we went to Zurich at the end of January, to the games festival Ludicious and said: “That’s so close, we can make a road trip out of it!

WERK1: WHAT EXACTLY DID YOU DO AT THE FESTIVAL?

Robin Hartmann: We wanted to represent our Bavarian location as a development and publisher location. But of course we can’t do this alone. We both come from the games industry – Robin from the development side, me from the publishing side – but if you want to represent a location somewhere, you always need entrepreneurs in your luggage. So we simply asked the community who would like to join us. At the fair, we’re not just interested in making business appointments, but in showing what the companies have to offer. We had four companies with us, each exhibiting in teams of two at our stand. On the first day, the quasi business day, they mainly talked to other developers and from the second day on the gamers joined in. Of course it was nice for the teams to get feedback from the visitors, but also to have the possibility to meet to match, where they could meet with publishers and make first business contacts.

WERK1: WHAT ADDED VALUE DID THE ROADTRIP AS SUCH HAVE?

Robin Kocaurek: We did that last year, but we didn’t have a stand at the festival yet. Also back then we had people with us and found out that actually the journey was one of the most interesting intra-networking-things we could do. People sometimes see each other for the first time, but they can still have extremely interesting conversations – everyone has time to tell where they come from and what they do. Nobody thinks that a 3 ½ hour bus ride is a great networking opportunity, but it really is – after all, you sit together in a small space. That’s why we do this as a road trip and don’t just pay for the journey. It’s an uncomplicated support, which doesn’t need much preparation, but which has a very high effect for everyone.

WERK1: DOESN’T IT MAKE SENSE TO MOVE INTO SHARED ACCOMMODATION AT THE NEXT FESTIVAL?

Robin Kocaurek: It’s not that far-fetched. We actually know a lot of developers who do that anyway. That makes a lot of sense and next time we’ll have that on the list. The fact is: Without us, many of our partners probably wouldn’t have gone to Zurich at all. But we were able to do just that. There was already an urge to visit the event, but we were able to bridge the last hurdle with the road trip.

Robin Hartmann: In the games industry, you don’t usually make a game just for the German market, but you’re actually on the move internationally immediately and have to think bigger. But of course you still have all the problems other companies have when they just start over. And of course this also includes the fact that it’s hard to spend a few 1000 Euros on it, for example to fly to San Francisco or to spend a few days in expensive Zurich. This is even more of a problem for student teams than for start-ups. They may be thinking about starting up or are already in the start-up phase, but have considerably less money and have to pay for all this from their savings.

WERK1: SO THE ROADTRIP WAS A COMPLETE SUCCESS FOR YOUR PARTNERS. WHAT DOES YOUR INTERNAL CONCLUSION LOOK LIKE?

Robin Kocaurek: Zurich is expensive! (laughs) We will definitely do it again. Because we also saw that it was a complete success for the people who were there. And the Ludicious in Zurich is just a great opportunity because it’s nearby, but you can still connect people so effectively internationally. There is a productive atmosphere, nice and familiar, but still with a high standard of quality. This is an event that we can play at very efficiently.

WERK1: THE NEXT LUDICIOUS IS ALREADY SET IN YOUR SCHEDULE. WHAT ELSE IS NEXT FOR GAMES/ BAVARIA?

Robin Hartmann: Yes, we have more than 31 events and projects that we will play on this year in addition to the daily business. In May, for example, the Gamecamp will be exciting: a local conference taking place for the eleventh time – with around 200 people. This is a bar camp, a conference format based on the fact that the participants themselves create the content. Our theme is “Gaming” – and that makes us one of the biggest bar camps in Europe – and we are now quite successful with it. This is really a great event, from veterans to hobbyists, students, professionals, everything is there.

Robin Kocaurek: We have many construction sites. Especially at WERK1 – where we offer a meeting point and events with many partners from the local community. Here in Munich, we organize and support many initiatives: from very small user groups to medium-sized conferences. In addition, there are projects on a national level – of course the big gamescom in August, where we have a large joint stand with partners. Other international projects include the GDC in San Francisco, the Reboot and the Nordic Game. Many Scandinavian countries are on the move at the Nordic Game and the Reboot is a developer conference in Croatia – so we are on the move a lot and dance at many weddings. But it’s a healthy mixture of regional, national and international.

WERK1: SOUNDS EXTREMELY EXCITING. AND AFTER A LOT OF WORK! ALL THE MORE WE THANK YOU FOR YOUR TIME AND FOR THE LITTLE INSIGHT INTO YOUR DAILY (AND NOT SO DAILY) BUSINESS.

You want to know more about the events and actions of Games/Bavaria? The two Robins put all the details on their website regularly – it’s worth taking a look.