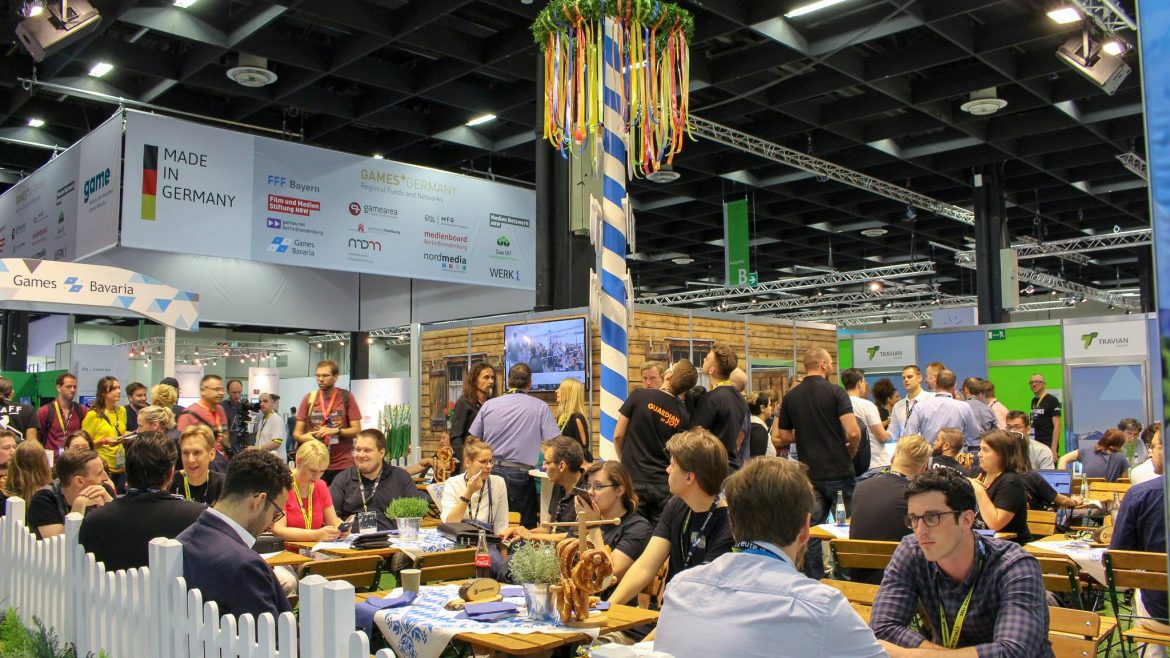 Also in 2018  gamescom had the city of Cologne firmly under control for almost a week. Europe’s largest gaming trade fair set a new visitor record for its 10th anniversary with 375,000 participants and exhibitors from 56 countries presented their innovations in the field of gaming. And of course  WERK1 with the Bavarian umbrella brand for the games industry Games/Bavaria, must not be missed: In a prime location on the trade fair grounds, the team brought a touch of Bavarian cosiness to the hustle and bustle of the trade fair. The maypole in the middle of the stand guided visitors from all directions into a beer garden full of details, where exhibitors and visitors could experience Bavarian feeling of home in the centre of the Rhine metropolis. A total of 12 exhibitors shared the stand space, which was also sponsored by the State Chancellery.

PRIME MINISTER TOBIAS HANS FROM SAARLAND AT THE BOOTH

A highlight on the very first day was the surprising visit of Saarland’s Prime Minister Tobias Hans. With a view to comparable programmes in his own federal state, he visited the striking beer garden stand and was visibly impressed by the Games/Bavaria team, who explained how Bavaria works together with the industry association to promote games.

The traditional breakfast reception on the 2nd day of the fair brought the stand to its limits. All visitors were greeted authentically with wheat beer and sausage by the organizers at the booth, who also took the opportunity to launch the new Games/Bavaria website live on the spot and rightly get a lot of positive feedback for new features such as jobboard, news area and detailed event calendar. A further announcement concerned a new job fair for the games industry, which will take place for the first time in WORK1 in November.

The Games/Bavaria joint stand at gamescom was not only the ideal location for our tenants and partners, but was also used for spontaneous meetings and discussions with its beer garden and inviting design. We are proud to bring some Free State to Cologne and the feedback of our tenants and guests was positive throughout.
Personally, it is one of the highlights of the year for me and I get new motivation and inspiration for the coming year at gamescom, until we meet again at gamescom in the Bavarian Biergarten.

A BOOTH IN THE BEST POSITION

In the best location in Hall 3.2 as part of the „Made in Germany“ Area, twelve companies were represented at the Bavarian joint stand. Also in 2018 the team decided for the joint appearance of the Bavarian industry representatives under the umbrella brand Games/Bavaria for a half-open stand with a large area for a beer garden. Rounded off by a maypole, a bit of cosiness came from Munich to the fair.

In a few words, we can say that the joint stand of Games/Bavaria, WERK1 and many other partners was again a great success and enabled many up-and-coming companies from Bavaria to present their products at Europe’s most important gaming trade fair.