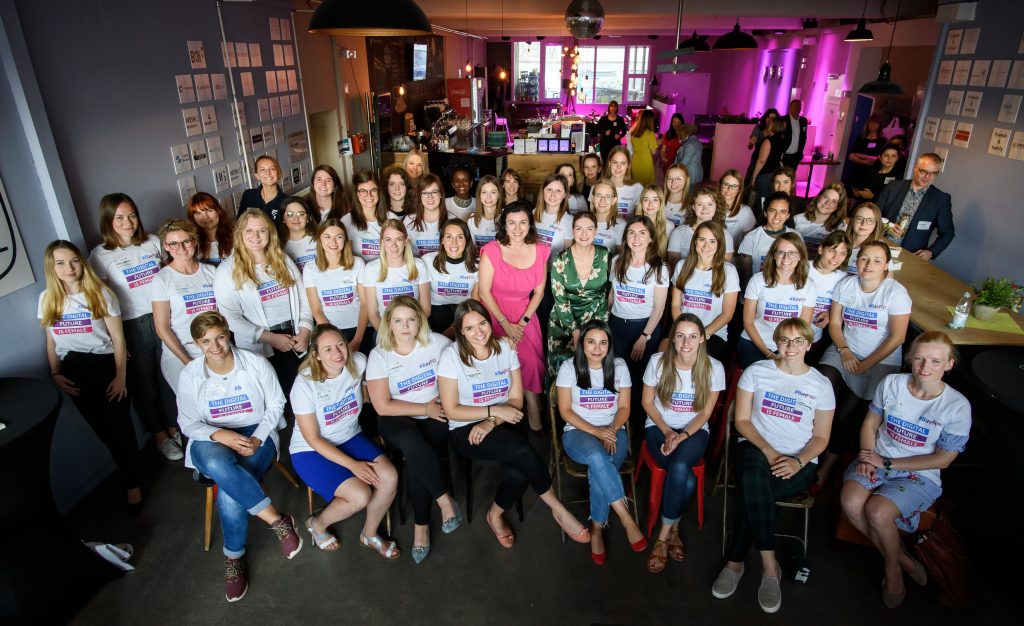 With the kick-off of the campaign “#BayFiD – Bavarian women in digital professions” the Minister of State for Digital Affairs Judith Gerlach wants to specifically support women on their way into digital professions. The initiative runs under the patronage of Bavaria’s Minister President Dr. Markus Söder. The programme was launched at WERK1 and Federal Minister Dorothee Bär also travelled from Berlin to support it.

A female quota of over 95% for an event: This is also a rarity among founders in WERK1 and generally the proportion of women in digital occupations is clearly too low at just under 20%. In any case, the Minister of State for Digital Affairs, Judith Gerlach, sees this as a great waste of potential in the course of the shortage of skilled workers in digital professions in Bavaria. The #BayFiD campaign she initiated is intended to change that. A 2-year program with expert support, exchange of experience and many networking opportunities is intended to make a start and produce many new “role models” for young women.

“I hope that women will have an enthusiasm for digital topics right from the start of their careers. Here we have to do the necessary preparatory work: To raise interest in digital topics at an early stage, to strengthen the proportion of women in research, to support women in training and further education for digital professions and to promote digital start-ups”.

THE KICK-OFF AT WERK1 – AN INSPIRING START

The host Judith Gerlach invited the participants to the start in WORK1. A special guest was also Federal Minister Dorothee Bär, who also comes from Bavaria and made the long way from Berlin for the event. In her short speech she emphasized the signal effect of the initiative and invited all participants to bring their experiences to Berlin. For them, digitalisation would be a great opportunity for women to combine their career with their role in the family, as working “remotely” in digital professions is the order of the day. In addition, more women would have to play an active role in digitisation and set an example for others.

A role that both power women already like to play. However, they themselves would like to see many more that show how women successfully design companies and products. In the subsequent talk, further female role models were brought onto the stage who reported on their experiences and successes in digital professions.

THE WERK1 ALSO SEES THE POTENTIAL AND NECESSITY OF THE INITIATIVE

From WERK1 it was of course a great pleasure for us to host the kick-off event of the initiative and to take up the many creative impulses. We also welcome the content of the initiative. WERK1 Managing Director Dr. Florian Mann commented: “The entire team and I personally see the necessity for this initiative in order to get more diversity in digital professions and ultimately also in digital start-up teams, which we want to promote in particular.

In this way, it is quite possible that WERK1 will participate in the discourse with its own projects and initiatives on the topic of “Female Founders” over the next few years. For the current #BayFiD campaign, we wish you every success – the start arouses anticipation for more.