Networks in the Startup scene: The Gründerpokern is back in WERK1 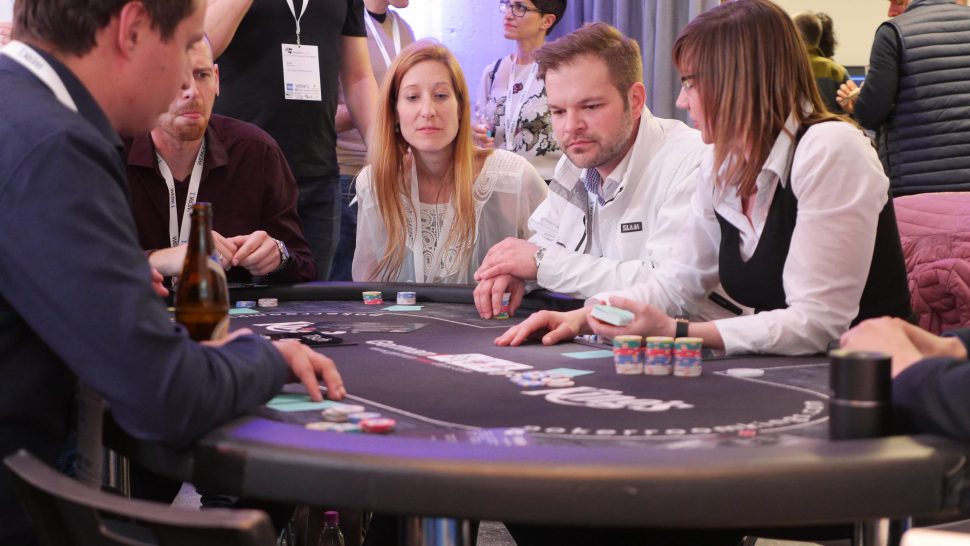 “Heads up” at WERK1: On Friday, April 6, we hosted the first Gründerpokern 2018 in Munich. Nearly 140 founders, sponsors such as Business Angels and other insiders from the founder scene came together for an evening in our eventspace to get to know each other better. And what could be better than a casual poker round in which you automatically get into conversation with other participants at your own table, during breaks or at the end of the day at the cocktail bar? A network meeting made to measure thus, which we aligned in the WERK1 to the repeated times with large success.

Owing to the experts of the Allgäuer Pokerclub the meeting is in principle open for all. The experienced Dealer gave at the beginning a short introduction to the basic rules and maps with the most important information lay ready at each table. In addition the experts kept the entire evening everything in the view and helped with questions further, so that up to the end experts and beginners could sit at a table and nothing stood in the way of the technical networks.

With significantly more hungry participants than planned, the only problem was that our food was not enough for everyone. The joy about the great interest in the event however comforted us and since our event team is of course a master of the art of improvisation, after a short wait there was still enough pizza for everyone – always in the direct vicinity of the workplaces of almost 40 startups and more than 100 coworkers. More startup feeling is hardly possible.

So everyone had enough energy to sit down at the poker table until late into the night and then gradually at the cocktail bar, and it really dragged on into Saturday before the last cards were counted at the final table and the lucky winners received their prizes. But in the end all participants were among the winners, because each of them is now a little bit better known in the Munich startup scene than before. And also as organizers we are once again very proud that we could welcome so many exciting personalities in the context of a great event with us.