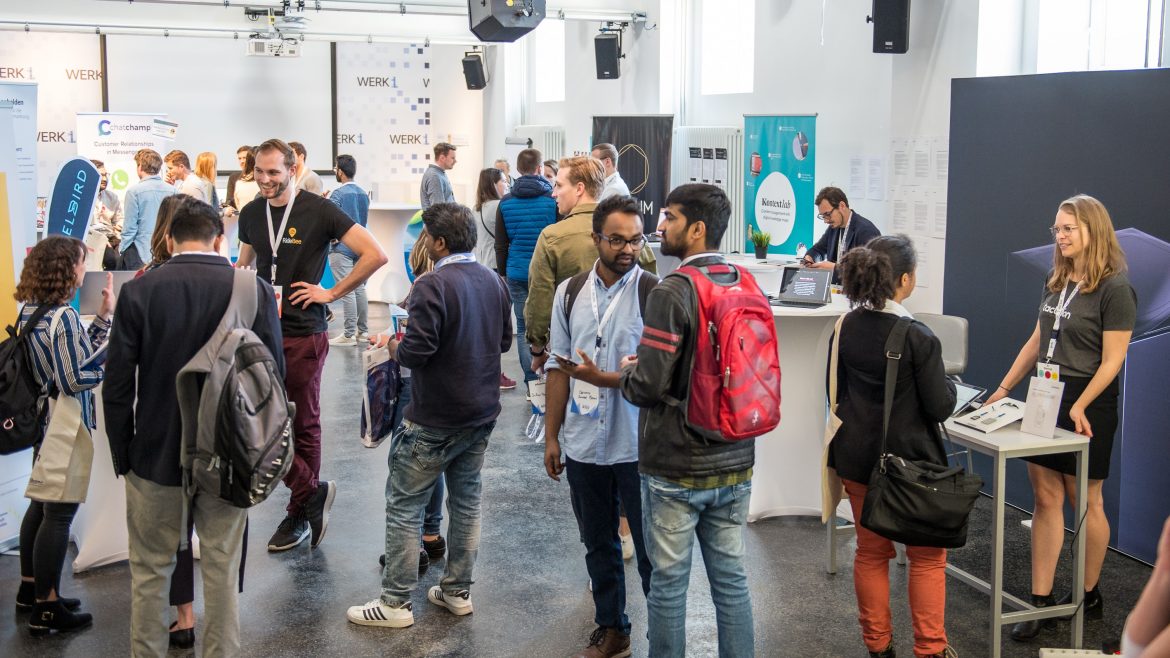 It‘s a Match! This good news was announced by the startups and visitors of the “Startup Work” on 30 March. The first job fair in Munich especially for the needs of startups worked from scratch and was accepted by all sides.

With 51 startups, over 340 job advertisements and almost 300 job seekers, the matchmaking event at WORK1 offered the ideal setting for promising discussions and new career options and thus more than just a potential job for each participant! With the “Tour Ticket”, all visitors were able to talk directly to founders or personnel managers from various start-ups, who presented themselves everywhere at WERK1. Holders of the “Matchmaking Ticket” were also brought into direct contact with suitable exhibitors by means of CVs uploaded in advance and had the opportunity to use the workshop programme on topics such as “Working in a Startup” or “Dos and Dont’s in Social Media”.

About one third of the exhibiting startups were residents of WERK1 and two thirds were external participants. The sectors ranged from software in the fields of technology, mobility, health, HR, gastronomy and housing to leisure gadgets. The entire spectrum was also represented with regard to the development phase: From the early-stage startup, which has just received its EXIST grant and is now looking for its first interns, to the “Grown-Up” with 150 employees, which wants to keep in touch with the ground and attract creative professionals. The connecting element required by WERK1: Startup-spirit and the associated creative entrepreneurial spirit must be present. Thus, the exchange between the founders on moving topics such as recruiting was not neglected.

That was the topic for the final panel: Moderated by WERK1 CEO Dr. Florian Mann, Sebastian Schuon (founder of Alasco), Ankit Khare (UX designer at Ginlo by Brabbler), Leon Zucchini (founder of Curiosity.ai), Magdalena Reith (startup coach & partnership manager at Unicorn Pitch) and Daniel Schosser (co-founder of Crashtest Security) reported on what makes working in a startup so special.

A JOB FOR EVERYONE

At the latest after that all participants were convinced that a job in a start-up is the right thing for the future. And at the Startup Work they were able to find the right job for their own qualifications, from co-founder to working student, from IT/development to marketing/sales. Seldom before has it been so transparent for startups and applicants as to which positions are to be filled in young, fast-growing companies.

POSITIVE CONCLUSION FROM ALL SIDES

The balance of the trade fair day was positive throughout: All startups were delighted to have promising discussions with seriously interested job seekers. The job seekers also left the event in the best of moods: Inspiring and consistently motivated founders were available for an entire day with their innovative products. And that despite or perhaps because of the bright spring weather that accompanied the fair and invited to the subsequent burger dinner in the sun. A successful first edition of Startup Work and the responsible persons quickly agreed: To be continued …