THAT WAS THE PROCHILE INNOVATION SUMMIT MUNICH AT WERK1 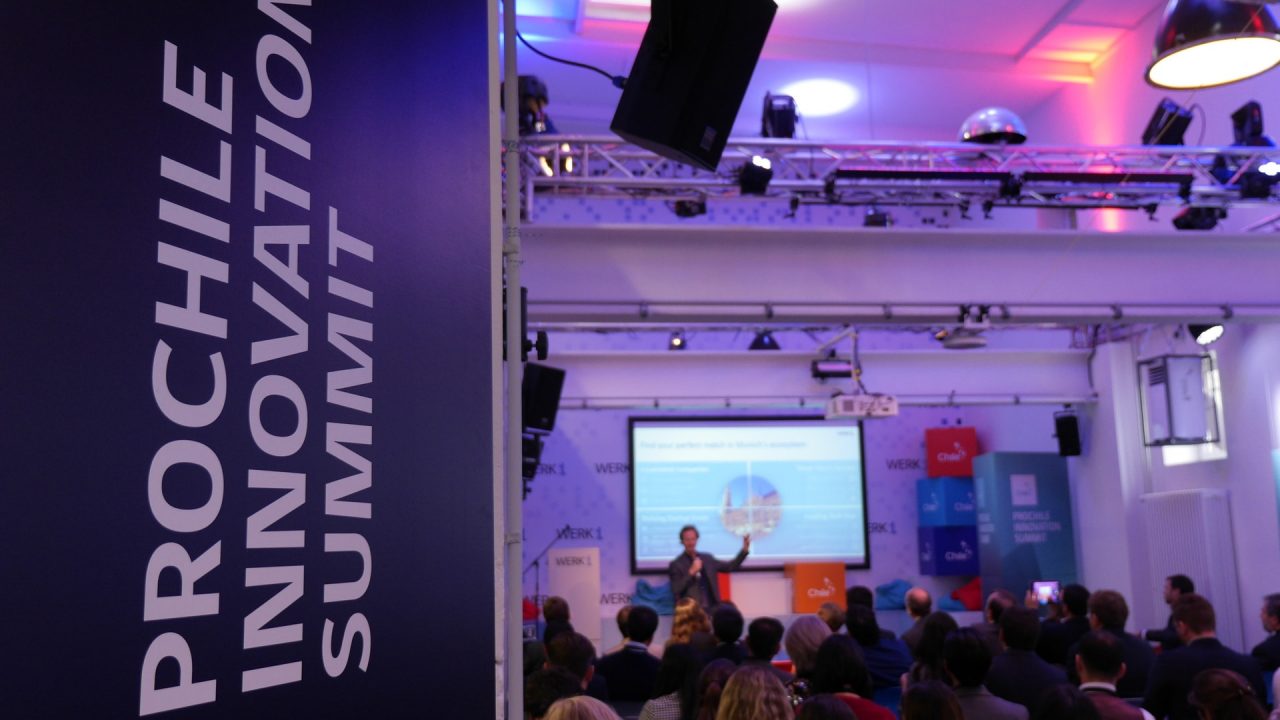 The dreamlike metropolis on the edge of the continent’s largest mountain range is a true hidden champ in terms of a strong startup scene. Not only the young and wild show their most successful side here. The old-established economic greats together make up the capital of the national stock index. This impressive intro could almost also stand for Munich. But what is meant is Santiago de Chile. The ProChile Innovation Summit was the only European event of its kind to be held in the Isar metropolis with good reason.

In order to position its own economy even more strongly on the export front, Chile has a long history of diplomatic and economic cooperation with its 56 international export promotion offices. Since the beginning of the year, Munich has once again been on the long list of interesting markets. In the opening speech of the ProChile director, Jorge O’Ryan, it became clear that it is his personal concern to reverse the short-term absence of a local branch. After the former ambassador of Chile had assumed his new office, it became clear to him that Munich, with its excellent B2B opportunities, is not only an absolute must on the list of commercial agencies, but is also ideally suited as a European venue for the authority’s most important networking event. It is not necessarily part of ProChile’s 45-year-old DNA to focus on the country’s start-ups. The list of past export hits is too long. But a solid entrepreneurial scene is the most important pillar of Chile’s Social Economic Development and therefore also for Jorge O’Ryan.

After events had already taken place in Beijing and Miami for the Asian and American continents, ProChile now wanted to network both the Bavarian and its own start-up scene with Munich’s politics and economy with the Innovation Summit. Accordingly, the guest list included speakers, high-ranking diplomats, politicians and investors. Workshops, panels, keynotes and social events were held at WERK1 for two days. Separately invited guests also had the opportunity to visit Microsoft Headquarter Germany and the BMW plant on a private tour. The second day ended with a two-hour Venture Capital & Pitch Session. Even though the 48-hour event meant a tight program for all participants, the necessary networking discussions in a convivial atmosphere at WERK1 were not neglected.

THE “HOMEBASE” OF THE STARTUPS

The fact that the first ProChile Innovation Summit took place on European soil at Munich’s most startup-friendly location was the logical consequence. WORK1 not only provided the right ecosystem of founding spirit and networking for the country’s economy and economic policy, but also the usual hospitality. Clemens Baumgärtner as a speaker for work and economy of the city of Munich (and Wiesn boss, so much time has to be) was just as happy to refer to the host attributes of Bavaria and Munich in particular during his opening speech. It is therefore quite clear to him that Chile not only has a strong trading partner to expect in the state capital, but also the right place to develop new business models. With its 17 universities, the city has, on the one hand, an extremely strong academic startup scene and, on the other hand, the corresponding companies of relevant size and market placement that are important for a vital B2B environment. Even the best business model needs customers who are willing to pay.

THE MUNICH MIXTURE MAKES IT!

In the end, Baumgärtner was also important to mention that the “Munich mixture” is not something that the city was put into its cradle. The balanced distribution of different economic and corporate structures is particularly close to Munich’s heart. Only if SMEs, corporate groups and micro-enterprises share the same field as the different industries and sectors, can a city walk stably through times of crisis. The year 2008 had simply shown how important a diverse economy such as the one we have in Munich is. In this respect, it was completely clear what position the Munich start-up culture also has. Only where new things grow can old things thrive.

WERK1 CEO Dr. Florian Mann was no less satisfied during the ProChile Innovation Summit. For him, the question of Munich’s position as a startup spot did not arise in the first place anyway. After all, we have two elite universities, an extremely high talent density, headquarters in IT, automotive, aerospace, consulting and much more. Even if only a third of the VC’s are to be found here, that is in comparison to Berlin and Co. quite little, the city simply has an innovative ecosystem. All the better if WORK1 functions as a brand in such an environment and wants to network international entrepreneurship with us. Florian Mann is definitely planning his next trip to Santiago in November. There he will have to award a place in WORK1 as guest juror in a national pitch session. We can therefore remain curious to see what the typical national founding spirit will bring to WERK1 from so far away…